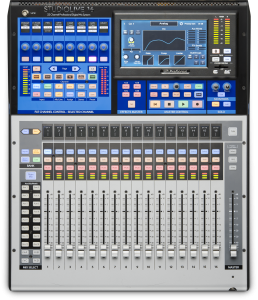 The most powerful mixer in its class.

The StudioLive® 16 digital console/recorder is by far the most powerful mixer in its class. This third-generation StudioLive mixer is fully recallable, with 17 touch-sensitive, motorized faders and 17 recallable XMAX preamps. Yet despite its extensive features, the StudioLive 16 actually improves upon PreSonus®’ legendary ease of use while letting you customize its workflow and operations. The StudioLive sound is better than ever, including all-new Fat Channel processing, re-engineered from the ground up, and vintage-style EQs and compressors. Add built-in AVB networking, onboard multitrack Capture™ recording to SD Card, and a complete suite of software, and you have a mixing and recording powerhouse that’s equally formidable in live and studio applications.

PreSonus Capture™ recording software is an intuitive, rock-solid multitrack recording application with virtual soundcheck. It’s installed directly into the StudioLive 16 so you can leave your laptop at home. Capture’s one-touch recording makes it easy to record to the StudioLive 16’s onboard SD multitrack recorder. When you’re finished recording, open your Capture session in Studio One® for Mac® and Windows® (included), and the entire mix scene will transfer to your Studio One session, including fader levels, Fat Channel settings, and, yes, any drum solos that you may have had to endure that night.

The StudioLive 16’s Fat Channel has received a major overhaul while continuing to offer digital precision with the heart and soul of analog. Our new Fat Channel implements a plug-in-style workflow that features vintage-style EQ and compression options on every channel, from classic tube limiters to passive EQs. And in addition to channel processing, the StudioLive 16 offers 6-band, fully parametric EQ on all mix outputs. Enjoy extensive, studio-style processing when recording on location or running shows on the road!

Define your own layouts, views, and workflows.

StudioLive 16 goes above and beyond in providing ways to customize things to best fit the way you work. Now you can customize your Fat Channel layout, putting the parameters you care about most right at your fingertips. There are even several workflow options to personalize your mixing experience. For instance, you can control the mixer with a multiple iPads and—optionally—a computer, each running UC Surface with a different view, enabling you to see and touch all of the controls you need at a given time.

Customize scenes and presets in new and powerful ways—including your way.

With StudioLive 16, we’ve upped the ante and given you more flexibility when working with scenes and presets. Mixer scenes now include Scene Safe. Similarly, we’ve expanded the concept of Fat Channel presets so that presets have, for practical purposes, become like scenes for individual channels, not only saving input and Fat Channel settings but also aux send and bus assignments. Of course you can also use preset filters to choose what you want to recall.

PreSonus StudioLive 16 mixers are tightly integrated with an entire suite of state-of-the-art software. Mix wirelessly or over a wired network from anywhere, using UC Surface touch-control software for Mac, Windows, and iPad®. Control your monitor (aux) mixes with QMix-UC. Remote control the mixer’s recallable XMAX preamps and Fat Channel processing with Studio One for low-latency recording with effects. (Reverb-drowned singers: rejoice!) Completely automate virtual soundchecks and record shows with Capture. Save mixer scenes with your live recordings in Capture and edit both in Studio One Artist. StudioLive 16 mixers and software work together to form a cohesive ecosystem that helps you achieve your creative vision.

Remote mix control available on a plethora of both wired and wireless devices.

In addition to the AVB recording connection, StudioLive 16 consoles sport a 1 Gb Ethernet port that can connect to a wireless router or directly to a computer, providing remote control of virtually all features. Mix wirelessly or over a wired network from anywhere using UC Surface for Mac®, Windows®, and iPad®. Even add a second—or third, or even fourth!—screen for fast workflow. Musicians can control their monitor mixes onstage with QMix® UC for iPhone®, iPod® touch, or Android™ device without the need for large monitor networks. Go wireless, wired, or both.

Connect a StudioLive 16 mixer, and you’ll instantly hear details and an open high end you’d expect to find only in an expensive studio console. We built our reputation designing great-sounding analog circuits, including our famous XMAX solid-state, Class A preamps, and we put all of that experience into designing the StudioLive 16. We didn’t cut corners on components, and we just say “No!” to noisy, crosstalk-y ribbon cables. As a result, the StudioLive 16 delivers the high-end audio quality you need to preserve your hard-earned reputation for producing great-sounding mixes and recordings. 18-inch – 1600 wattsThe reputation of elite subwoofers is known industry wide. The next generation of élite subs will not disappoint. 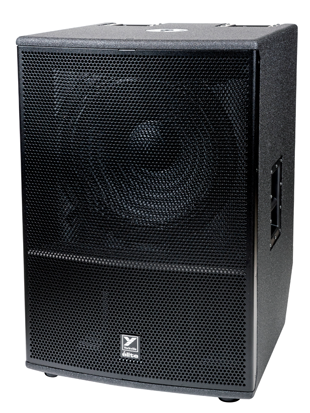 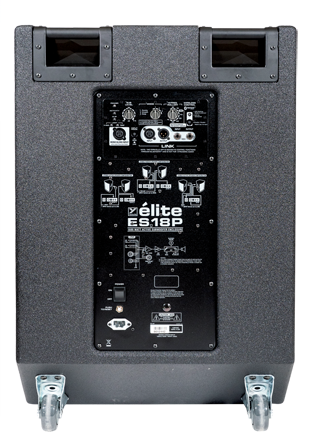 The ES18P is a modern-day update of our flagship ‘giant killer’, the LS801P. The cabinet dimensions have been altered to offer better mobility, but the punch is still there. We’ve also added a little-brother to the family, by scaling down the 18″ subwoofer design into a 15″ platform. The ES15P design dials up the watts and incorporates a custom engineered 15″ woofer to produce an astonishing amount of low end output in a 15″ subwoofer.